What did God do before he created?

A book as you have wished for long time! – A book which will simply blow you away.

A book for all people of good will who have for a long time searched for a coherent world view which is not at loggerheads with our previous knowledge like the numerous big and small religions. 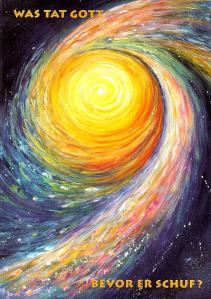 Not suited for esoteric dreamers, no playground for mystical apparitions, but an upright clarity which is truly enlightening.

No snag, no double moral standards, no association, no sect, no guru, no membership fee.

The Bible of the new millennium which outlines in which direction humanity shall evolve itself in the coming time in order to be finally able to get out of the current absolutely poor form.

The author defies all those who stand in the way of this target, from the established religions via the financial sharks to  the truly mighty ones on this planet – not the politicians as puppets but the powerful ones in the background.

A sweeping attack which nevertheless hits each bull’s eye. A genuine revelation which originates from an ordinary boy and was transformed by Martin Weise into a fiery speech or a technician’s factual description.

Not everything contained in this book is destined for everyone, but everyone will find everything which he always wanted to know. A fantastic and unique but on the other hand captivatingly simple, coherent and logical world view. Quantum leaps in your database of knowledge are consequently not excluded. The creation as a real thought experiment of the one who always existed, with all the possibilities and meanders which still await their implementation. A God who is not absolutely flawless and who is heading for perfection by gaining experiences.

With plenty of divine humour the author explains the actual state and the target and does not forget to emphasize that he cannot prove anything and that you consequently do not have to believe him. The same applies to the Medicine of God where you do not have to believe anything because it can be proven in the next best case and therefore you may question everything as long as you can substantiate at least to some point that you are clearly more right.

This book answers many open questions which have been answered by hardly anyone  in such a comprehensible and clear way. Moreover, it spares you the reading of 20 specialist books; it is thus a book not for scholars but for people like you and me.

The approaches concerning God and his creation are logically comprehensible but rather unconventional. There are many things which had not yet been written about in this way. The few genuine esoterics who can remember former reincarnations or even the stages between them confirm what Martin Weise has learned from his paranormal foster child Theo.

Even if your breath might be taken away sometimes as soon as your previous religions convictions are getting caught in the cross fire: do not believe this book but accept it as a hypothesis and afterwards test – slowly, step by step and very carefully. Then you might ask yourself what seems more probable to you:

Our current and rather distorted image of the past or the bright future of a new era.

The second edition which is published mainly as an e-book complements the discoveries which are meanwhile five years old, with recent scientific findings and specifies them in a few points:

Two physicists have dared to carry out a backward calculation behind the big bang and, lo and behold, there existed (at least) one preceding universe which they had calculated with the help of the spatial structure in the fourth dimension. Many esoterics are unmasked as ignorant persons who are unable to cope with life and who try to veil their incapacity with plenty of nice sounding words.

Crop circle pictures liven up the whole book even though the latest dual crop circle with the face on the Shroud of Turin from August 2010 is unfortunately not contained in it. In exchange, the book describes in detail how the Vatican falsified the facts in order to keep its power structure further alive. That the church which is currently led by the Pope who is reigned by the forbidden high financial lodge P2 and the grand lodge of the Opus Dei is driven into the ground or into the abyss is a different kettle of fish. The motto “If you want to build a new temple, you need to demolish the old one first” applies here as well.

It has already been well known that the present nutrition sciences lead directly to illnesses. A novelty in this book is the representation of the entire climate hysteria. From the ozone hole which is allegedly caused by the CFCs, via the so called ecological cleaning – a drastic step backward! – or the substances which are on account of manipulated laboratory tests demonized as cancer-producing the global warming lie finally escalates into the CO2 hysteria.

These are nothing but lies and deception because carbon dioxide is heavier than air and only a share of 0,3 per mil exists in the earth atmosphere. Without carbon dioxide there would be no life on this planet and the reduction of carbon dioxide which costs several billions of Dollars is nothing but an enormous suicide programme.

If one views the predicted flooding disasters more closely from a scientific standpoint, they also would melt away like the icebergs which float around in the sea. Moreover, science has in the meantime discovered a “climate seesaw” which ensures a long term balance between north and south. After the real estate bubble and the banking crisis the climate bubble which has for a long time been overheated has now also burst when one dared to approach it armed with the truth.

Of course only a part of the readers will be interested to find out  that the Bible of the Old Testament – as many had assumed long before – was retroactively written, rewritten or complemented accordingly a few centuries after the events described in it so that it actually only represents merely a book of poems for which the following statement applies: “Even if it is not the truth, it has at least been well thought out.”

Due to this back projection of beliefs over the millennia the Jews have succeeded in converting JHWH, a small provincial God including his wife, the Canaanite mother goddess Asherah, into the Almighty God, the creator of heaven and earth. And to such a dubious history is the chosen people referring.

In chapter 6 extensive space is devoted to the moral component of our monetary economy and the question of the compound interest curve. A separate subchapter 19 “The crash and the monetary system of the future” describes in detail how things shall continue after the crash that still inundates us in waves, so that humanity will in the truest sense be put back on the path to a promising future.

Everyone knows how things do not work but no one has yet revealed to us how things could work in a reasonable way. This book ventures an attempt to explain how the insights of Silvio Gesell about the nature of money could be put into the reality of a future monetary economy on the computer. It goes without saying that the powerful self-proclaimed world elite will put up a fierce struggle against this and that not a stone will be left standing. However, the idea that a “Golden Age” will rain down on us like April showers without this creative destruction is just some clueless esoterics’ illusion.